October 19, 2020 (Google Translation) – Replicating the feat carried out by the Magellan-Elcano expedition 500 years ago, the training ship ‘Juan Sebastian de Elcano’, accompanied by the Chilean Navy training ship ‘Esmeralda’, sailed through the Strait of Magellan, arriving at Punta Arenas after both sister ships rendezvoused at sea yesterday.

It has previously been announced that ARA Libertad was to take part. At press time no further information available.

Upon her arrival at Punta Arenas, the ‘Juan Sebastian de Elcano’ paid tribute to the city with a 21-salvo gun salute which, following a naval tradition, was answered by another 21 salvos from land, thus starting the commemoration of the discovery of the Strait of Magellan.

Amongst the commemorative acts, reduced in number due to the pandemic, a religious service is scheduled for October 20th on board the Chilean Navy warship ‘Williams’ in memory of the first mass held 500 years ago on current Chilean soil, with the training ships anchored in Fortescue Bay. 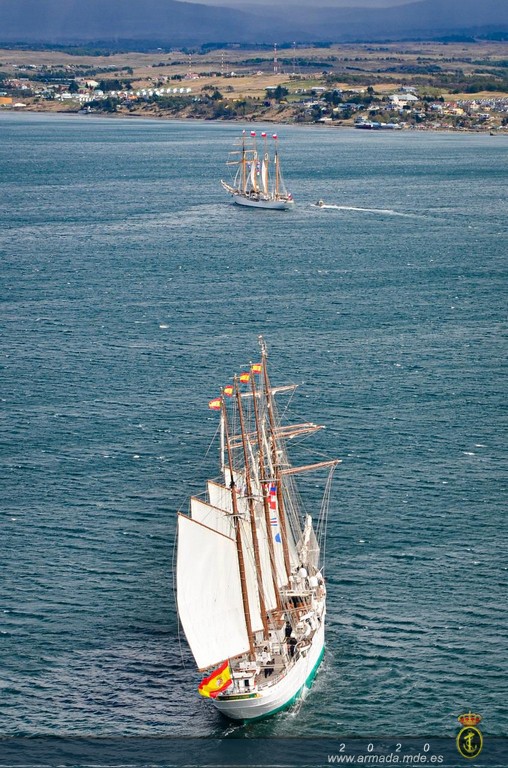 The discovery of the Strait of Magellan was a historic event that opened the Pacific to navigation from the Atlantic Ocean, thus culminating a search long pursued by the Crown of Castile. 500 years ago, on October 20th 1520, five Spanish ships entered the tangle of cold channels of the southernmost tip of South America, and 38 days later, unknown waters appeared before them: those of the Pacific Ocean.

The fleet was commanded by the Portuguese sailor Ferdinand Magellan. In one of the ships, the ‘Concepción’, a Basque sailor born in the town of Guetaria was travelling as executive officer: his name Juan Sebastián Elcano. It was he who, after Magellan’s death in battle with an indigenous tribe in the Philippines, led that expedition back to Spain, having circumnavigated the globe for the first time in history. It was in 1522, three years after starting the journey, that the Basque sailor completed the feat by reaching the port of Sanlúcar de Barrameda in the south of Spain with the only surviving ship of the expedition.

The training ship ‘Juan Sebastian de Elcano’ left Cadiz on September 24th for her 93rd Training Cruise, in which she is scheduled to sail around the world as one of the main milestones organized to commemorate the 5th Centenary of the first Circumnavigation of the Earth, undoubtedly the greatest feat in the history of navigation.

Once the Strait of Magellan is crossed, the ‘Juan Sebastian de Elcano’ will sail along the Pacific coast of the American continent, calling at the ports of Valparaiso, El Callao, Guayaquil and Acapulco. In addition, the ship will have the opportunity visit other relevant places of the original expedition such as Guam, the Philippines or Indonesia.