July 1, 2020 (Google Translation) – Last Tuesday, June 30 at the Rota Naval Base and on board the Italian frigate VIRGINIO FASAN, the act of relay of command of the NATO permanent group Standing NATO Maritime Group (SNMG2) took place, a command held by the Italian admiral Paolo Fantoni and that has been assumed by the captain of the ship Manuel Aguirre Aldereguía. 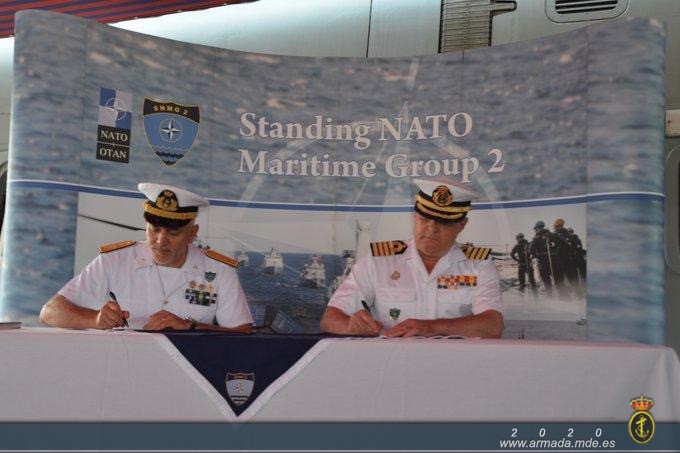 The event was attended by Admiral Eugenio Díaz del Río Jaudenes, COMSPMARFOR and Admiral Chief of the Arsenal in Cádiz, Ricardo Atanasio Hernández López. After the relay, the frigate ALVARO DE BAZAN became the command ship of the SNMG2, one of the permanent NATO fleets that it will have in the Black Sea and in the eastern Mediterranean, its preferred scene of operations during the next months.

NATO’s permanent naval groups have a high level of readiness and availability and have a wide range of capabilities available to the Alliance. The SNMG2 is an immediate reaction maritime force made up of a variable number of destroyers or frigates, whose function is to provide NATO with an immediate operational reaction capacity in naval scenarios. The Navy has maintained its continued presence in these groups for more than thirty years.

May 18, 2022 admin Comments Off on ARA Austral on Post-Refit Sea Trials

The oceanographic vessel ARA Austral set sail to...
May 18, 2022 admin Comments Off on USS Frank Cable Returns to Guam From Australia Trials

Abraham Lincoln CSG Trains With PACAF in the Philippine Sea

Commencing May 16th, HMAS Creswell and the waters...
May 18, 2022 admin Comments Off on National Maritime Day in Baltimore May 22

National Maritime Day in Baltimore May 22