June 3, 2020 – Before it became a facility dedicated to maintenance and modernization almost 70 years ago, Norfolk Naval Shipyard (NNSY) used to build ships. In the case of World War II, sometimes 27,000 ton ones.

June 3 will mark the 75th anniversary of commissioning the NNSY aircraft carrier USS Lake Champlain (CV-39). Commissioned a couple months before World War II ended in Japan, Lake Champlain didn’t serve in those battles. However, it would set speed records for returning troops back home, provided vital support during the Cuban Missile Crisis, and served as the primary recovery ship for America’s first manned flight into space. In just two decades of service, the ship nicknamed “the straightest and greatest” was recommissioned, twice redesignated, sailed the world, and participated in some of the most pivotal moments of the Cold War era. Its service history might not have been the straightest, but by its decommissioning in 1966, it could lay its claim among the greatest.

NNSY devoted a lot of time, manpower and resources to building its three carriers during World War II because of their expected value in the Pacific theater. As the second in line behind the USS Shangri La (CV-38), Lake Champlain finished nine months ahead of schedule despite having to contend with multiple construction priorities and shifting tradesmen around the shipyard. Mass production methods with prefabricated parts and central purchasing of equipment greatly aided construction.

Quickly constructed, speediness came to be a defining quality of Lake Champlain’s legacy. Less than six months since commissioning, Lake Champlain was already making history, making the fastest-ever crossing of the Atlantic Ocean carrying home more than 5,000 Americans from Europe as part of Operation Magic Carpet. The carrier averaged 32.048 knots while cruising the 3,360.3 nautical miles from Gibraltar to Chesapeake Bay in four days, eight hours and 51 minutes.

As one of a whopping 24 Essex-class carriers—the most robust ship class of the 20th century—built within a 3 ½ year period, Lake Champlain faced an uncertain future once the war ended and troops were back stateside. Mothballed in February 1947, it sat in the reserve fleet for more than three years. Two months after the start of the Korean War in June 1950, Lake Champlain began conversion as part of the SCB-27A modernization program. With the unique distinction of getting a rebuilt superstructure and flight deck, but no angled flight deck and hurricane bow, Lake Champlain became the last U.S. carrier in operation without an axial flight deck.

Recommissioned in September 1952, the carrier became the largest ship to transit the Suez Canal in its 83-year history on the way to the Pacific. Now redesignated as an attack carrier, Lake Champlain earned that label as flagship of Carrier Task Force 77. In the final six weeks of the Korean War, the carrier’s air group rained down on North Korea’s bunkers, trenches, runways and large guns, escorting bombers and providing air support to ground soldiers until a signed truce on July 27, 1953.

After the ship was converted a second time, to an antisubmarine carrier (CVS-39) which became official in August 1957, Lake Champlain spent a relatively quiet few years until it would make history again as the prime recovery ship for America’s first manned flight into space, Freedom 7. NNSY’s carrier that brought more than 5,000 heroes home at the end of 1945 would again play host to another American hero following victory, this time on May 5, 1961. Just 11 minutes after splashdown, Mercury astronaut Alan Shepard was onboard the carrier to take a congratulatory call from President John F. Kennedy. Four years later, Lake Champlain would subsequently serve as recovery ship for the Gemini 2 and Gemini 5 missions. 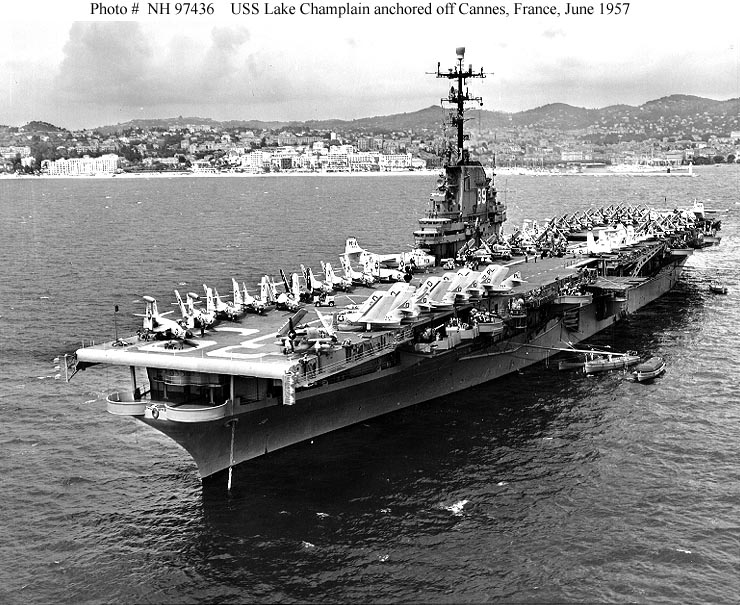 Prior to that, the carrier still had another historic role to play during Kennedy’s presidency. On October 24, 1962, the carrier pulled into position supporting the quarantine of Cuba, where the Soviet Union was building bases for offensive missiles. The naval blockade, fortified by the carrier, was a key contributor preventing military supplies from reaching Cuba and forcing the withdrawal of the Soviet missiles.

With the Navy recommending Lake Champlain for modernization as part of its Fiscal Year 1966 budget, Secretary of Defense Robert McNamara demurred due to concerns about limited capabilities of anti-submarine carriers. Lake Champlain was decommissioned May 2, 1966.

NNSY’s three carriers built during World War II were all part of the Essex-class. In the last two years of the war, this class provided crucial support to the Pacific theater, beginning with centralized raids in the region and the invasion of Tarawa. Coming full circle, NNSY’s last carrier—the USS Tarawa (CV-40)—commissioned December 1945, was named in honor of that bloody but pivotal battle that transpired two years before. During the war, Essex-class ships protected other naval ships, supported troop landings, bombed Japanese islands, and provided vital transport of soldiers and aircraft. They were bombed, torpedoed, and crashed into by kamikaze pilots.

Not a single Essex-class carrier was sunk.