The Command of the 4th Naval District (Com4ºDN) confirmed, in May, its support for the project “Multiscale oil spill detection and modeling system”, developed by the Federal University of Pará (UFPA) and other academic institutions in the country. The project is part of the Science of the Sea Program, of the Ministry of Science, Technology and Innovations (MCTI) in partnership with the Brazilian Navy (MB), which seeks to produce and apply scientific and technological knowledge to achieve social, economic and environmental benefits.

MB and MCTI contracted several projects through Public Call 06/2020, launched by the National Council for Scientific and Technological Development, to develop research and development to deal with oil spills on the Brazilian coast.

In addition, MB has also periodically promoted meetings and debates through the Technical-Scientific Commission for the Advice and Support of Monitoring and Neutralization Activities of Impacts Resulting from Marine Pollution by Oil and Other Pollutants in the Blue Amazon (ComTecPolÓleo).

ComTecPolÓleo, coordinated by the Directorate-General for Nuclear and Technological Development of the Navy and advised by the Centro Tecnológico da Marinha in Rio de Janeiro, was created in 2020 with the objective of devising an inclusive technical-scientific articulation mechanism, in favor of increasing the ability to detect, prevent impacts, formulate propositional actions and timely response actions, as well as help to mitigate damage in the event of environmental incidents resulting from pollution by oil and other pollutants at sea.

To collaborate with the project, it will be necessary to carry out hydroceanographic surveys in order to collect hydrodynamic data, such as the intensity and direction of sea and river currents, water discharge and tide, in estuarine systems of the coast of Pará. The Navy will make naval resources available to assist UFPA researchers.

The Centro de Hidrografia e Navigação do Norte (CHN-4), a Military Organization (OM) subordinated to the Com4ºDN, is responsible for supporting the project, through the use of the Hydroceanographic Vessel “Garnier Sampaio”, the Buoyant Vessel “Tenente Castelo” and the River Hydroceanographic Notice “Rio Tocantins”. The partnership will provide important information for the National Oceanographic Data Bank, in addition to contributing to national development. 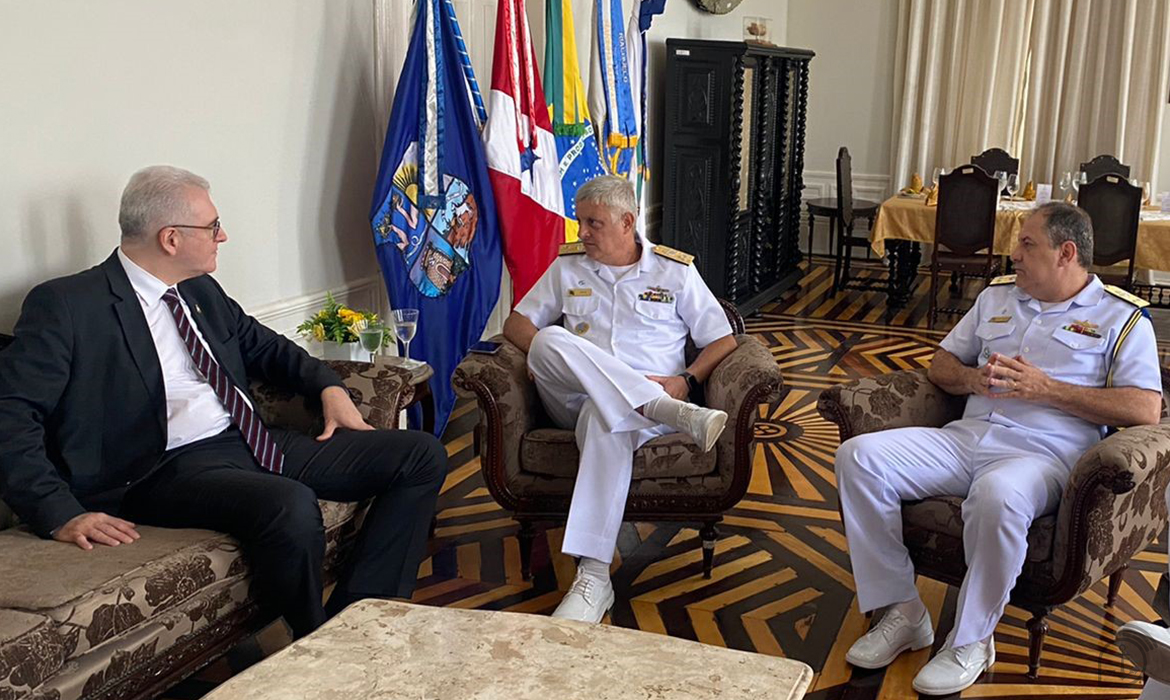 Rector of UFPA, Commander of the 4th Naval District and Chief of Staff of the Com4ºDN – Image: MN-RM2 Barroso/Brazilian Navy

The interdisciplinary project will also make use of technologies from remote sensing, artificial intelligence, environmental engineering, numerical modeling, data science and oceanography. The study will allow the assessment of the extent of impacts on different ecosystems, such as corals, mangroves, beaches and seagrasses; of actual damage caused by oil on fishing courses; and the preventive detection of accidents involving the transport of oil and fuels. The trajectory of oil in the sea and rivers will also be simulated, helping to determine the origin of the spill and to identify the possible polluter.

For the director of CHN-4, Frigate Captain Andérmisson Claudino da Silva Moura, the technical cooperation between the scientific community and the Com4ºDN will result in gains for civil society. “The expansion of knowledge of the hydrodynamics of the region’s rivers, in addition to promoting navigation safety, will boost the sustainable development of the local economy,” said the director.

The rector of UFPA, Emmanuel Zagury Tourinho, highlighted the importance of the union of different universities and bodies to develop the project, with the purpose of predicting and mitigating the impacts of occurrences that can compromise our maritime and river ecosystems. “To be successfully developed, it depends on the cooperation of many actors and the Brazilian Navy is a partner of the universities in this initiative, guaranteeing conditions so that the embarked stages are carried out successfully. We are grateful for this collaboration and hope that it will be a stimulus for other joint actions in favor of science in the Amazon”, concluded the dean.

A museum celebrating the role of a Scottish...
June 29, 2022 admin Comments Off on Navy Confirms Wreckage is USS Samuel B Roberts DE 413

Seventy-eight years after her loss during World War...
June 29, 2022 admin Comments Off on KRI Gusti Ngurah Rai Arrives in Pearl Harbor for RIMPAC 2022

Naval Air Station Lemoore is proud to announce...
June 29, 2022 admin Comments Off on Baltic Maneuvers: After BALTOPS is Before BALTOPS

Baltic Maneuvers: After BALTOPS is Before BALTOPS