By Riley S. Brown USCGR & Author of The Story of the Coast Guard

“When it seemed that all chance of being saved was gone and that a number of us would be lost, your valor and coolness during this period of extreme stress showed itself and, owing to the heroic measures and daring chances taken by you and the “stick-to-it” employed in the work of rescue, not a man of the James was lost.”

Letter of thanks from the enlisted crew of the minesweeper USS James, 1919

Shortly after World War I, a remarkable event demonstrated the caliber of Coast Guard officers. It occurred when a Navy-manned squadron under Coast Guard Capt. Harry G. Hamlet, the convoy commander, ran into a storm off the French coast. The incident showed the courage and seamanship that may be expected of Coast Guardsmen under incredible conditions. 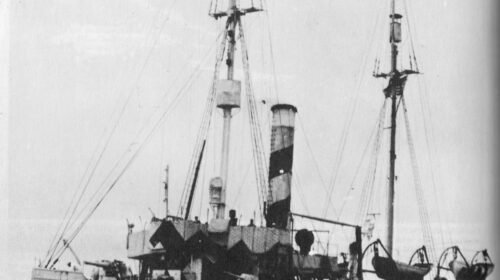 Hamlet was the senior officer present, in command of both the Marietta and the entire Navy squadron, a task he was performing from the exposed flying bridge of the old gunboat.

The weather, which had been ideal at the time of sailing, kicked up as the day wore on. Heavy seas developed and the going got rough. It was close to 1 p.m. when the Rambler sent a signal, “Man overboard!” The convoy decreased speed, dropped rafts and markers and began circling in an effort to pick up the man. The wind, by this time, had increased to a gale, and heavy seas made rescue work hazardous for the flimsy vessels.

An hour later, one of the wooden minesweepers, the USS Courtney, reported that it was leaking badly. Hamlet ordered the Courtney to return to Brest with the USS McNeal, another former fishing vessel, acting as its convoy. However, as the weather worsened, all of the converted fishing vessels were ordered to make for Brest, with the Macdonough and the Rambler to escort them. This left the Marietta and the Teresa to carry on the search for the man lost overboard.

Shortly afterward, word came from the McNeal that it too was in trouble, so Hamlet ordered one of the other vessels on the way to Brest to assist it. Trouble followed trouble. Word flashed from the Courtney that the vessel was sinking and needed immediate help. 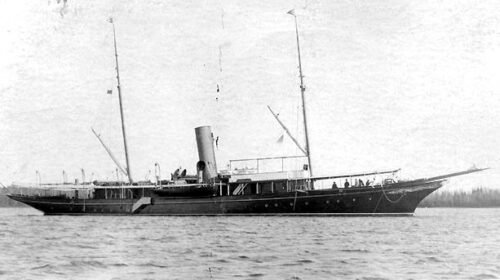 The Teresa and the Marietta were forced to abandon the search for the man overboard and proceed to the Courtney’s assistance.

Directed by Hamlet to get to the windward of the Courtney, the transport USS Teresa made an oil slick to drift over to the stricken vessel and calm the waters so the crew could be removed. These orders were carried to a successful conclusion. The Teresa took the Courtney into tow, which was in a sinking condition, and the battered squadron fought on against the storm to make Brest. 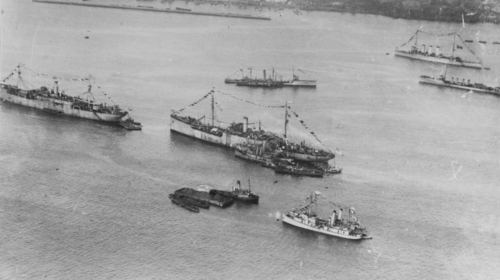 At about 9 p.m., that night, a huge wave struck the USS Douglas, wrecking the vessel’s bridge and injuring several men. Douglas’s plank seams had opened, and water was pouring into its hold. The vessel quickly informed the flagship Marietta of its condition and asked for assistance.

It was apparent by this time that the Courtney could not be saved. The Teresa cut the vessel free and proceeded to the Douglas’s position. By dint of careful maneuvering and skillful seamanship, the Teresa’s captain placed his ship’s bow against the Douglas’s port side. While the Teresa held fast in that position, the Douglas’s sailors leaped from the sinking vessel’s deck to the Teresa. In this remarkable maneuver, not a single man was lost, and only one was slightly injured. 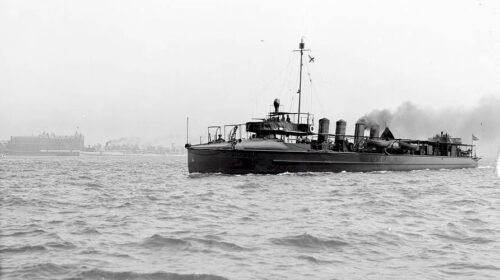 By that time, the Courtney had sunk and the Teresa had taken the Douglas in tow. The little squadron was now in dire circumstances, with one ship already lost and another about to go. So far, however, no lives had been lost, except for that of the man washed overboard from the Rambler’s bridge. The storm seemed to be increasing, and tremendous seas were running. The Douglas twisted and tugged at its lines behind the Teresa. Finally, the hawsers parted and the sinking vessel was swept away into the night, never to be seen again.

Word flashed from the USS James that it too was now in trouble, suffering from a flooded engine room and a stove-in bow. The Marietta headed for the James’s position and, arriving there at about 11 p.m., found a tug and two destroyers that had been sent out from Brest to assist the storm-whipped convoy. While these vessels and the Marietta stood by, laying oil on the water to smooth the huge waves, the tug managed to get a hawser across to the James and, as daylight broke over the troubled sea, started to tow it toward Brest. 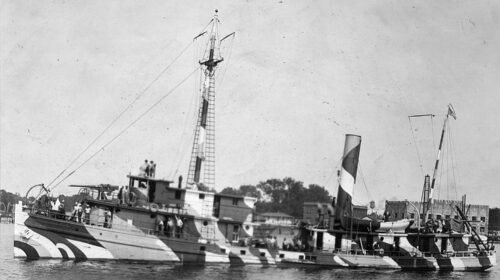 To add to the situation, Hamlet’s flagship, the Marietta, ran into trouble when one of its two propeller shafts broke. At the same time, a hull plate sprang, pouring water into the engine room and putting out the fires under one boiler. Hamlet’s little Navy gunboat was in a precarious condition. 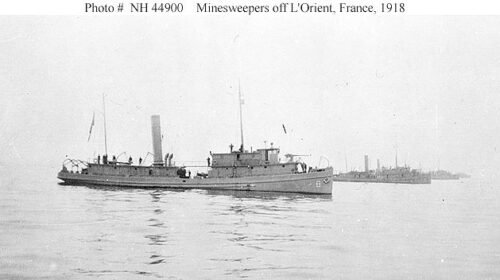 Soon, the James parted its lines and broke away from the tug that had the vessel in tow. The James was rolling in the trough of the sea, and its superstructure was a mass of wreckage. The ship’s commanding officer informed Hamlet: “Do not believe the James will hold together much longer. Men are exhausted from work at pumps. Would suggest removing crew at once.” 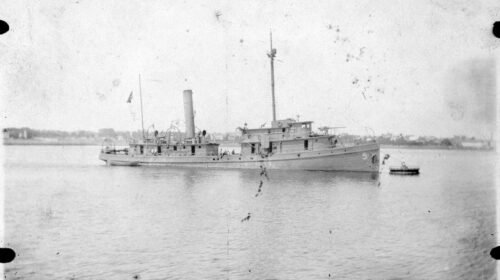 Hamlet laid his plans quickly. The destroyers were standing by, ready to offer any assistance they could. However, Hamlet knew from experience that the small deck of a destroyer was no place from which to effect a rescue in heavy seas. A World War I destroyer’s deck was too low in the water, which made it impossible for anyone to remain on deck while the vessel was under way in rough weather.

Hamlet ordered the destroyers to move around and form a lee for the crippled James, and release oil into the water to drift over to it. When this was done, Hamlet brought his ship around and moved toward the James. It was a difficult maneuver to carry out with only one engine. The slightest error in judgment, the tiniest hesitation for just a fraction of a second, could send the Marietta into a deep trough, where it would be easy prey for mauling waves.

However, the Coast Guard officer made no errors, nor did he hesitate. He brought the Marietta broadside to the James. He gave the necessary order at just the right moment, and a Lyle line-throwing gun barked. The line went sailing into the rigging of the crippled ship. It was drawn into the vessel in a few minutes and fastened to a life raft, which was lowered over the side.

Three men lashed themselves to the life raft, and the Marietta’s crew drew it through the churning water to the side of the gunboat. There, the men were hoisted aboard the gunboat by means of bowlines. This operation was repeated several times as the James settled lower in the water. Three hours later, the last of the crew of 47 was drawn safely aboard the Marietta. A few minutes later, the USS James rolled over and sank.

One must realize that here was seamanship seldom equaled and certainly never surpassed. Not a man died in the sinking of the three naval ships, except the sailor lost from the Rambler’s bridge, despite the fact that a gale of almost hurricane force was blowing. Hamlet supervised the operations from the bridge of the Marietta, and every life saved in those trying hours may be credited either directly or indirectly to his ability as a seaman. Perhaps it is not amiss here to mention that Hamlet was later appointed Commandant of the Coast Guard after serving as the first superintendent of the modern Coast Guard Academy in Connecticut.