This Thursday (10), Brazil celebrates a historic date: the bicentenary of the creation of its Squadron. It was on November 10, 1822 that the National Flag was hoisted for the first time on a Brazilian warship, the Nau “Martim de Freitas”, later renamed Nau “D. Pedro I”, the first flagship of our Fleet. It was amid the various Portuguese oppositions that the now known Brazilian Squadron was born, which aimed to combat, at that time, the naval forces contrary to the independence process. To commemorate the date, a religious ceremony was held today (10th) at the Church of Candelária, in downtown Rio de Janeiro, and another military one, aboard the Multipurpose Aerodrome Ship “Atlântico”, current Captaincy of the Fleet. 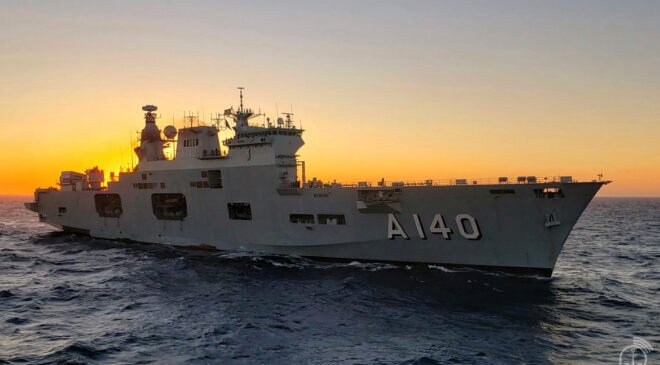 As stated by the head of the Department of Maritime and Naval History of the Directorate of Historic Heritage and Documentation of the Navy (DPDDM), Frigate Captain Carlos André Lopes da Silva, in this process of territorial consolidation, it was necessary to create a structure to combat directly the action of the rebels. “The most important minister of the time, José Bonifácio, understood that the creation of a strong Fleet, that is, the establishment of a national naval power, would be the indispensable condition for Brazil to be able to face any military attempt to regain control by the Portuguese at that time.

Still on this period, Jéssica de Freitas e Gonzaga da Silva, doctoral student in history, politics and cultural assets at the Getúlio Vargas Foundation (FGV), also reinforces that it was strategic to have an active police station, since we did not have roads in that period . “The defense of the sovereignty of the newly independent Empire of Brazil and the preservation of the integrity of the territory justified the immediate creation of the Brazilian Fleet in 1822. The absence of roads increased the strategic role of maritime communications to guarantee the transport of troops, the defense of the international trade, the projection of power by the central government and pacification, ensuring Brazil’s continental dimensions”, reinforces the professor.

The Squadron todayTwo centuries have passed and, since then, the Brazilian Fleet has maintained the same spirit of defending the Homeland and territorial unity. In addition to all the material part of the Naval Force, the importance of the personnel involved is highlighted, as highlighted by the Commander-in-Chief of the Fleet, Vice-Admiral Arthur Fernando Bettega Corrêa. “Human capital is essential for the full fulfillment of missions and is our greatest asset. Today’s Squadron is made up of men and women who vibrate and strive daily in the exercise of their tasks, in order to remain in a position to defend our sovereignty and our interests in the Blue Amazon. There are many examples of our predecessors who, in these 200 years of rich history, defended our interests against powerful nations.

For Professor Jessica, the projects developed by MB make a difference in the maritime mentality of the nation. “First, for continuing to promote an autonomous strategic naval thinking, in order to gain technological independence and have a robust program for building the nucleus of Naval Power, among which, the continuity of the Submarine Development Program ( PROSUB), the Program for the Development of Surface Vessels (PROSUPER), the Program for Obtaining Ships with Maritime Area Control Capacity, the Program for Building Patrol Vessels (PRONAPA) and the National Surface Anti-Ship Missile Project (MANSUP ). These ambitious projects contribute to affirm the role of Naval Power in the international projection of the Brazilian State, above all,

Composition of the current Brazilian Fleet The Fleet is the set of forces (composed of combat and support surface ships, submarines and aircraft, incorporated into the Brazilian Navy), under a single command, for administrative purposes.

The Squadron of the Future Revolutionizing Brazilian technology and the naval industry, the Submarine Development Program (PROSUB) represents a significant technological advance in the country, based on intellectual capital, sensitive engineering and cutting-edge technology, in addition to encouraging defense policy, boost personnel training and strengthen national sovereignty.
The “Riachuelo” Submarine (S40) is the first in the class of four conventional submarines with diesel-electric propulsion, which will provide greater deterrence power in the 5.7 million km² of our Blue Amazon. To protect this heritage and guarantee Brazilian sovereignty at sea, MB invests in the expansion of its naval force, as is the case of the S40, an important surprise element that is indispensable to deny access to enemy vessels in national territory, increasing the dissuasive power of Brazilian Armed Forces.

To achieve this purpose, this type of ship takes advantage of its particular characteristics, notably, the concealment capacity and the power to cause damage to opposing naval forces. They have advanced sensors – such as a set of sonars and periscopes with cameras for night vision –, in addition to a combat management system equipped with modern and complex algorithms, which allow the submarine to detect and classify targets at long distances.

For the construction of conventional Brazilian submarines and, in the future, the conventionally armed submarine with nuclear propulsion “Álvaro Alberto”, a naval complex was built in Itaguaí (RJ), which has several installations, equipment and specialized systems. Today, it is one of the most modern shipyards in existence, as the construction of submarines requires highly qualified labor and an industrial park equipped, in order to enable the execution of the various manufacturing, commissioning and testing activities.

All of this requires the integration of sophisticated technologies, following rigorous norms and standards of quality and safety. In this way, Admiral Bettega states that “the Fleet is made up of professionally trained military and civilians, who always seek to retrain themselves, learning and developing new doctrines, tactics and technologies, and who, in a very forceful way, maintain high levels of training and readiness, essential to successfully fulfill the missions entrusted to them”.

In addition to these submarines, the Brazilian Navy has also conducted the “Tamandaré Class” Frigate Program since 2017, with the aim of promoting the renewal of the Fleet with four modern ships, of high technological complexity, built in the country. The frigates will be versatile escort ships with high combat power, capable of countering multiple threats and intended for the protection of maritime traffic and denial of the use of the sea, able to carry out missions to defend the Brazilian coast. In addition, they will also be employed in the patrol of Brazilian jurisdictional waters, with emphasis on the inspection and protection of economic activities, such as commercial activity, with the use of maritime transport, oil and fishing.
Around two thousand direct jobs and six thousand indirect ones should be generated at the height of the construction of the ships with at least 30% of domestic content in the first ship, and 40% from the second onwards. This provides a gradual transfer of technology in naval engineering for the manufacture of military ships, as well as combat management systems, propulsion and other subsystems that make up a warship.

The delivery of the frigates is scheduled to take place between 2025 and 2028.