Austal Australia has taken possession of a de-commissioned Armidale-class Patrol Boat (ACPB), the former HMAS Maitland, from the Commonwealth of Australia, to commence planning, modification, and test and evaluation of autonomous and remotely operated systems.

The Patrol Boat Autonomy Trial (PBAT) is a collaboration between Austal, Trusted Autonomous Systems Defence Cooperative Research Centre and the Royal Australian Navy Warfare Innovation Navy (WIN) Branch. The Trial will establish robotic, automated and autonomous elements on a patrol boat, providing a proof-of-concept demonstrator, for optionally crewed or autonomous operations for the RAN into the future. The Trial will also explore the legal, regulatory pathways and requirements of operating an autonomous vessel at sea. 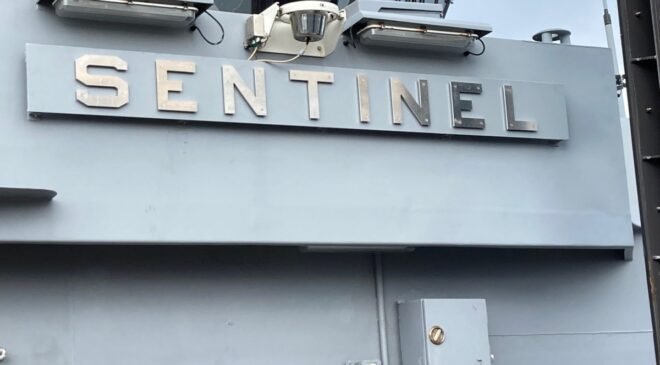 PBAT couples Austal’s experience as the expert designer and manufacturer of the Armidale-class Patrol Boat (ACPB), with subcontractor L3Harris’ experience as a world leader in autonomous vessel technology. With co-funding from the Commonwealth of Australia, guidance and support is provided from the Trusted Autonomous Systems Defence Cooperative Research Centre.

Following the arrival of the vessel in Henderson, Western Australia, the re-named ‘Sentinel’ has entered the Trial’s ‘modification phase’; which includes the fitting of a variety of monitoring and control systems and technologies that enables autonomous and remote operations. From July 2023 the vessel is expected to be registered under Australian Maritime Safety Authority (AMSA) jurisdiction as a domestic commercial vessel to enable sea trials to commence October 2023.

The PBAT project aims to:

“Austal are pleased to be at the heart of Australia’s autonomous naval journey, working with our Industry partners, Navy and the Commonwealth, to complete the modification and trials, and share this data to improve the wider knowledge base.”

“Our expert staff are excited to be working to learn more about the challenges and opportunities in this autonomous and robotic space.

“Austal always strive to improve our designs and build ships that outsmart Australia’s adversaries, delivering capability into the hands of the Australian Defence Force to improve their ability to fight and win at sea,” Mr Gregg said.