Sailors, Marines and Coast Guardsmen from several ships, squadrons and military units will be in San Francisco for the annual San Francisco Fleet Week, October 3-10.

San Francisco Fleet Week offers the public an opportunity to take a tour of the ships and interact with service members as they showcase their ships’, units’, and services’ capabilities. It also gives the public a chance to gain a better understanding of how the sea services support the national defense of the United States and protect freedom of the seas. 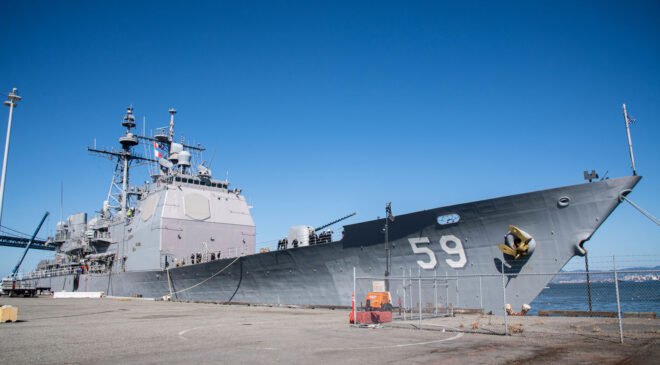 Navy, Marine Corps and Coast Guard forces and assets also participate in a robust disaster response exercise, an annual event joint training event that adds a serious, practical objective to San Francisco Fleet Week. The exercise is designed to train military forces and local, county, state and federal government agencies to work together to respond to natural and man-made disasters, such as earthquakes, wildfires and industrial accidents.

Service members will have an opportunity to interact with the local community, while participating in a number of community relations projects and entertainment events throughout the week.
The Fleet will arrive in San Francisco Sunday-Monday, Oct. 2-3. The public will have opportunities to tour the ships and meet service members.

The schedule for ship tours is as follows and is subject to change:

Friday, October 7
No tours however the ships can be seen in the San Francisco Fleet Week Parade of Ships 10:30am-11:30 p.m. from Marina Green, Fort Mason, Aquatic Park, Fisherman’s Wharf, Pier 39 and the Embarcadero.

The public is encouraged to attend tours and interact with service members.
Prohibited items aboard include the following:
– Food or drinks, including ice chests and coolers
– Camera tripods
– Skateboards, bicycles, hover boards
– Gang-related clothing
– Unmanned aerial systems
– Weapons, including knives, firearms and club weapons,
– Defensive chemicals or sprays, including mace and pepper spray;
– Spray cans of any type, fireworks, flammable liquids or other explosives
– Illegal drugs and drugs considered illegal at the federal level, including marijuana, and/or drug-related paraphernalia
– Electronic cigarettes
– Large bags, including backpacks and large camera bags (small camera bags and small handbags may be permitted, but will be subject to search)