Many things in the world have already turned 200 years old, but few are as significant as the celebration of a country’s independence. In 2022, in addition to the bicentennial of Brazilian Independence, the creation of the Squadron is also celebrated on November 10, 1822. Due to the importance of these dates, a series of civic-military, cultural, sports and social activities will be carried out from 1st to September 10th. The events organized by the Brazilian Navy  (MB) will take place throughout the country, with emphasis on the National Flag Replacement Ceremony, the civic-military parade, in Brasília (DF), and the Naval Parade, in the city of Rio de Janeiro. (RJ).

The celebrations began last year and are scheduled to end in 2023. In February of this year, the event “Velas Latinoamerica 2022” was held, with the participation of sailing ships from seven countries in the Americas and took an audience of approximately 10 thousand visitors to the port area of ​​Rio de Janeiro. By the end of this year, around 100 commemorative events will have been held across the country, including those alluding to the 200th anniversary of the Brazilian Fleet.

The National Pavilion in the square is the largest in the country, measuring 14 meters wide and 20 meters long, totaling 280 m2. During the celebration, the new flag is hoisted to the sound of the National Anthem, with a salvo of 21 cannon shots. After reaching the top of the 110-meter-tall flagpole, the old flag is lowered to the sound of the Anthem to the Flag. This year, at the end of the ceremony, the Marine Corps Martial Band will perform a performance with evolutions that form figures while performing military and popular songs.

Continuing the celebrations, between the 2nd and 4th of September, the Parking lot of Ana Lídia Park, in Brasília (DF), will host the Independence Exhibition, coordinated by the Brazilian Navy. Visitors will be able to participate in various activities and learn about the operative means of the Singular Forces, in addition to the Military Fire Department (CBMDF), the Civil Police, the Traffic Department of the Federal District, the Mobile Emergency Service of the Naval District, the Federal Highway Police, the Federal Police and the National Force. The opening and closing will feature a performance by the Navy’s Band of Music from the Brasilia Marine Corps, whose repertoire includes military and erudite songs, as well as national and international hits. There will also be presentations by the CBMDF Music Band, on the afternoon of the first day, 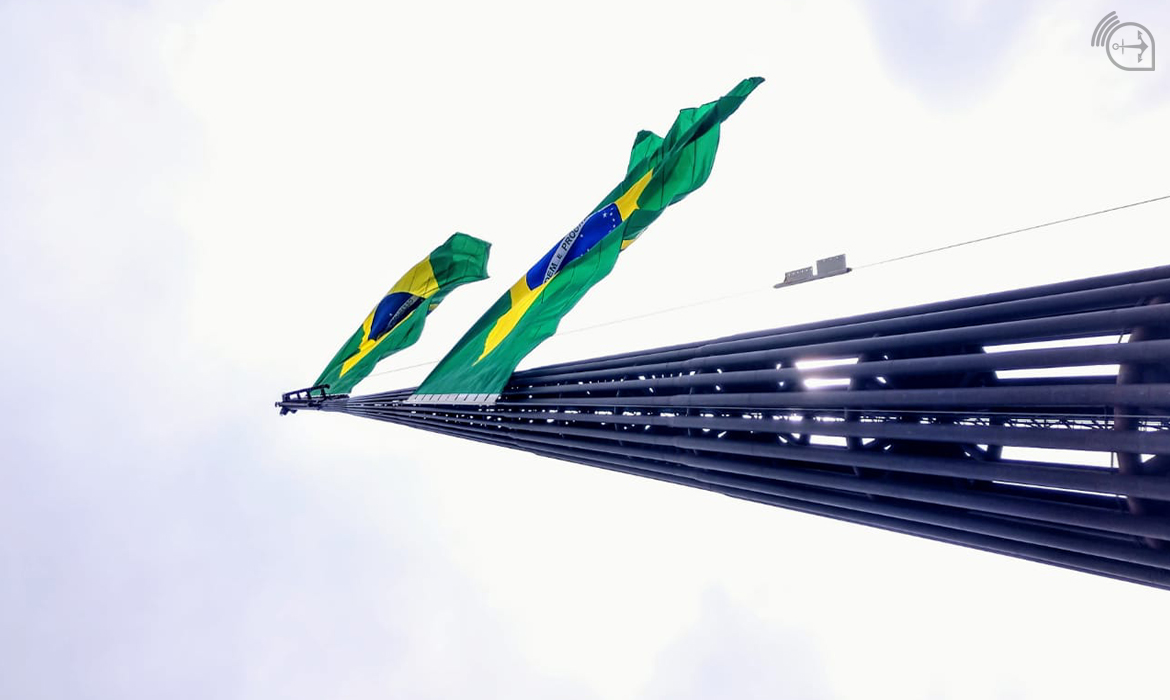 Replacement of the flag in Praça dos Três Poderes 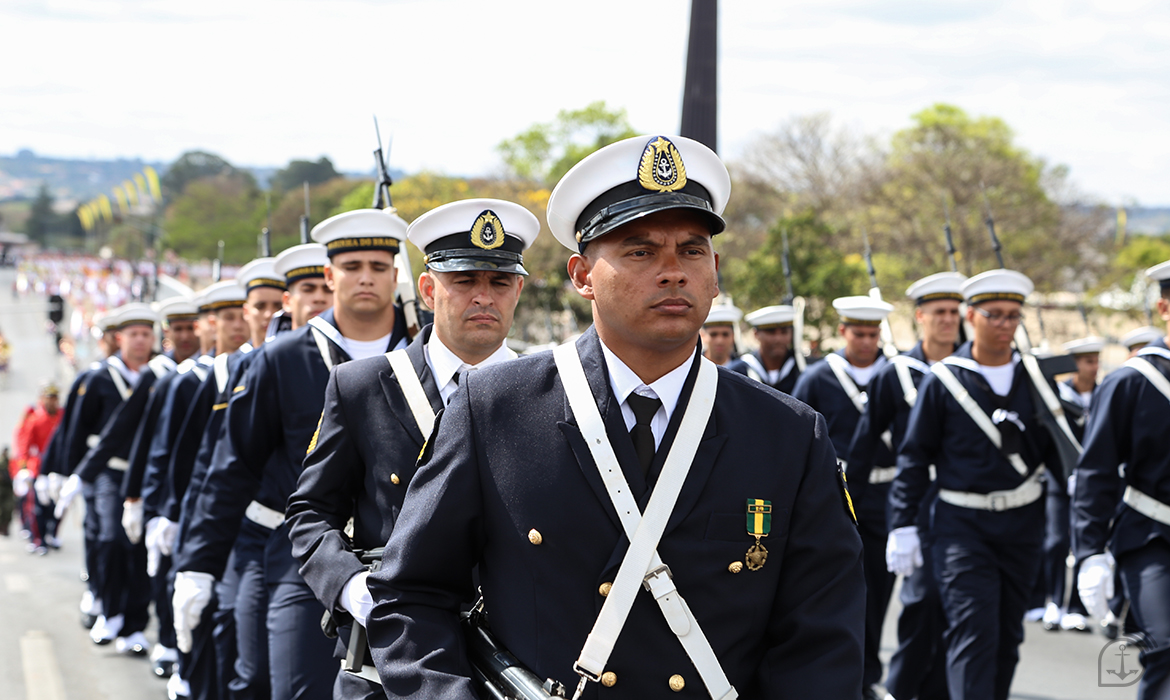 Public Visitation to Ships moored at Pier Mauá – RJ
The public from Rio de Janeiro will have the opportunity to visit the Capitânia da Esquadra Brasileira, the Multipurpose Aerodrome Ship “Atlântico”, and the Sailing Ship “Cisne Branco”, on the 3rd and 4th of December. September. On the 8th of September it will be the turn to get to know the Frigate “Rademaker” and Corvette “Júlio de Noronha”, as well as the School Ship “Sagres” of the Portuguese Navy. The public visit is free and the interested public will be able to register in advance from the 1st of September.

Civic-Military Parades, Parade and Naval Magazine
Until the publication of this article, the traditional military parades of September 7 were confirmed in the states of Alagoas, Amapá, Amazonas, Bahia, Ceará, Mato Grosso do Sul, Pará, Paraíba, Pernambuco, Piauí , Rio Grande do Norte, Rio Grande do Sul, Santa Catarina and the Federal District.

On the 7th, in the capital of Rio de Janeiro, there will be the now traditional Parada Naval e Aeronaval, in which three aircraft and 20 ships from the Brazilian Navy and from other countries invited to the celebrations of the Bicentennial of Independence will travel along the waterfront, starting at 9:30 am, starting at Recreio beach and ending at Forte de Copacabana.

At the end of the event, the Brazilian ships will anchor in front of the beaches of Copacabana and Flamengo where the public will be able to see the ships more closely. The Naval Parade has taken place on the edge of Rio de Janeiro since the early 2000s, with emphasis on the parades commemorating the Bicentennial of the Birth of Almirante Tamandaré, in 2007; 200 years since the opening of the ports, in 2008; and the 150th anniversary of the Battle of Riachuelo, in 2015. Also on the 7th, there will be a performance by the Martial Band of the Marine Corps on Copacabana beach.

On the 10th of September, as in 1922 ( read the article about the Centennial of Independence), a Naval Review will be held in Guanabara Bay with the participation of ships from the Brazilian Fleet and the Navies of friendly countries.

1922 – Centenary of Independence – The cruiser “Barroso” inspecting the ships 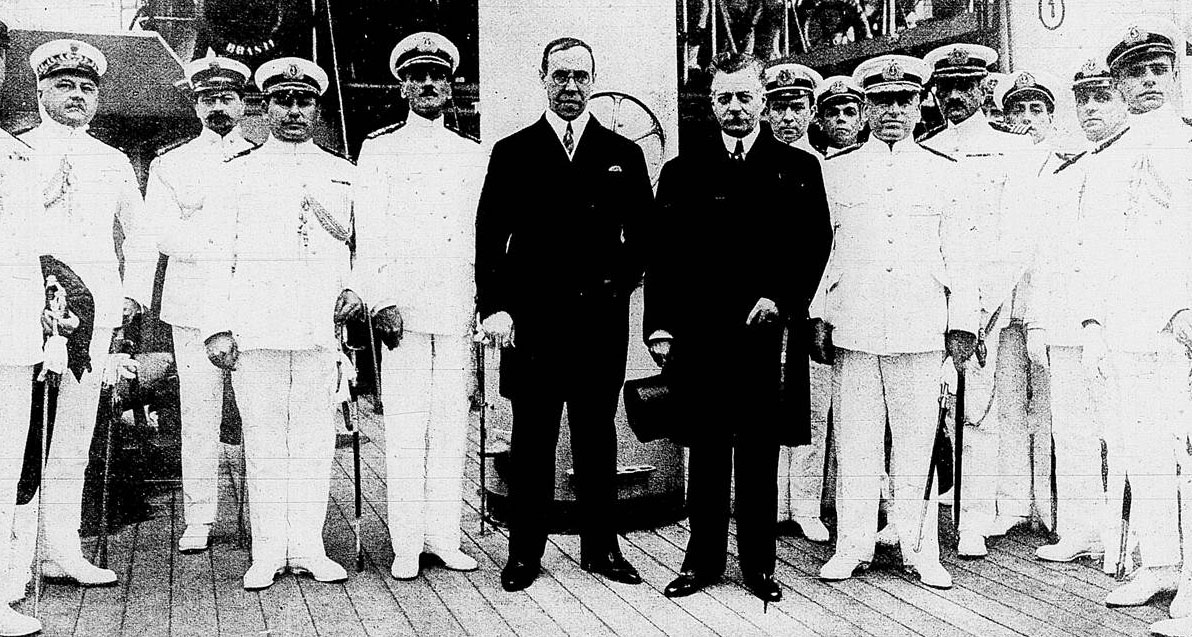 President Epitácio Pessoa and Minister Veiga Miranda aboard the cruiser “Barroso” in 1922, during the Revista Naval 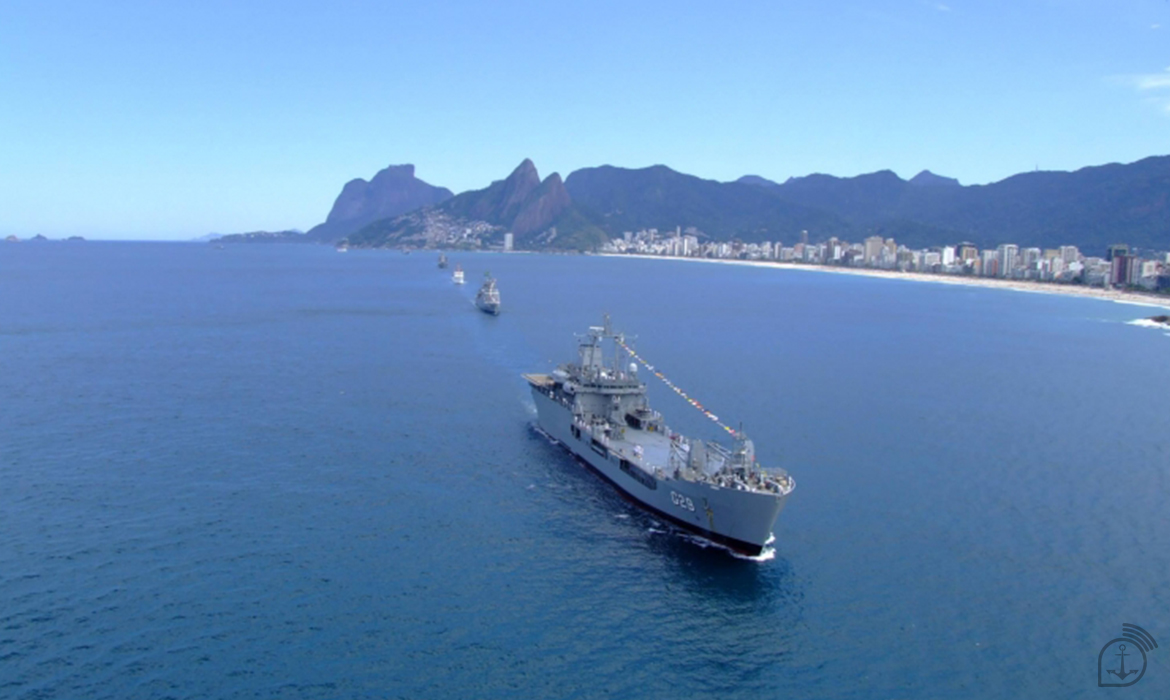 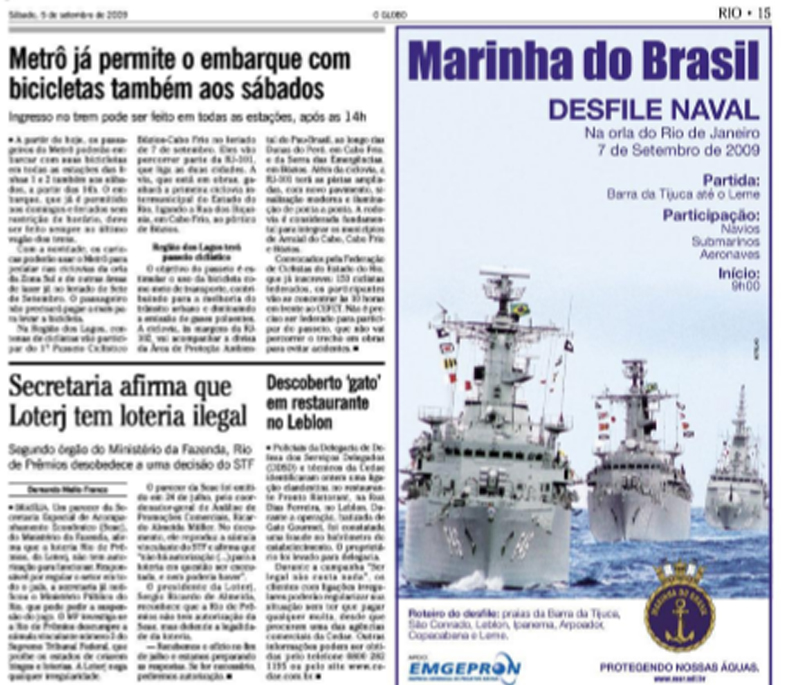 Advertisement of the 2008 Naval Parade in the newspaper O Globo 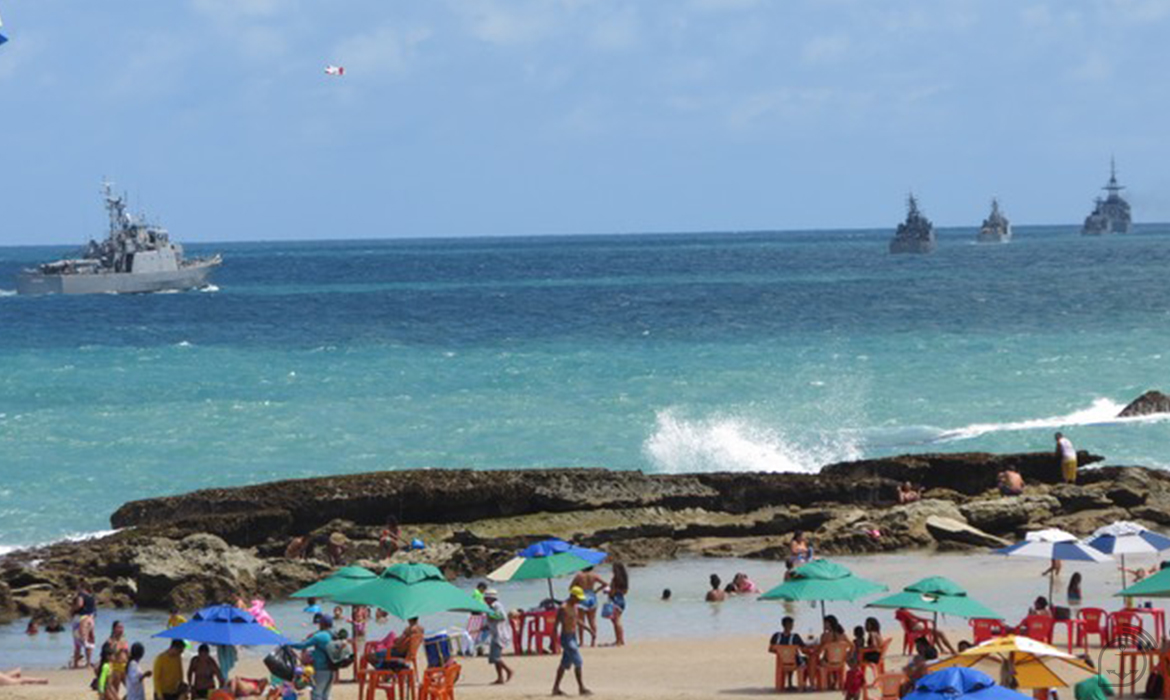 Public watches the Naval Parade on the waterfront

Commemoration of the 200th anniversary of the Brazilian Fleet
As part of the celebrations of the Bicentennial of Independence, in November, the Brazilian Navy will also commemorate the 200th anniversary of the Fleet. Created to fight the Portuguese naval forces that opposed the independence of Brazil, in 1822, the Brazilian Squadron was born. The then Captain of Sea and War Luís da Cunha Moreira, Viscount of Cabo Frio, was appointed the first born Brazilian to the chair of Minister of the Navy of Independent Brazil. On November 10 of the same year, the national flag was hoisted for the first time on a Brazilian warship, the Nau “Martim de Freitas”, later renamed Nau “Pedro I”, the first flagship of the Fleet.

Currently, the Brazilian Fleet remains ready to play the constitutional role of the Brazilian Navy: to prepare and employ the Naval Power, in order to contribute to the defense of the Homeland, safeguarding the integrity of the territory and of the Jurisdictional Waters that, in addition to the extension already claimed to the United Nations, constitute the strategic Blue Amazon, the Brazilian heritage at sea.

The Centro de Comunicação Social da Marinha will publicize the events mentioned in this report through the social media of MB (Facebook, Instagram and Twitter) and the Agência Marinha de Notícias. 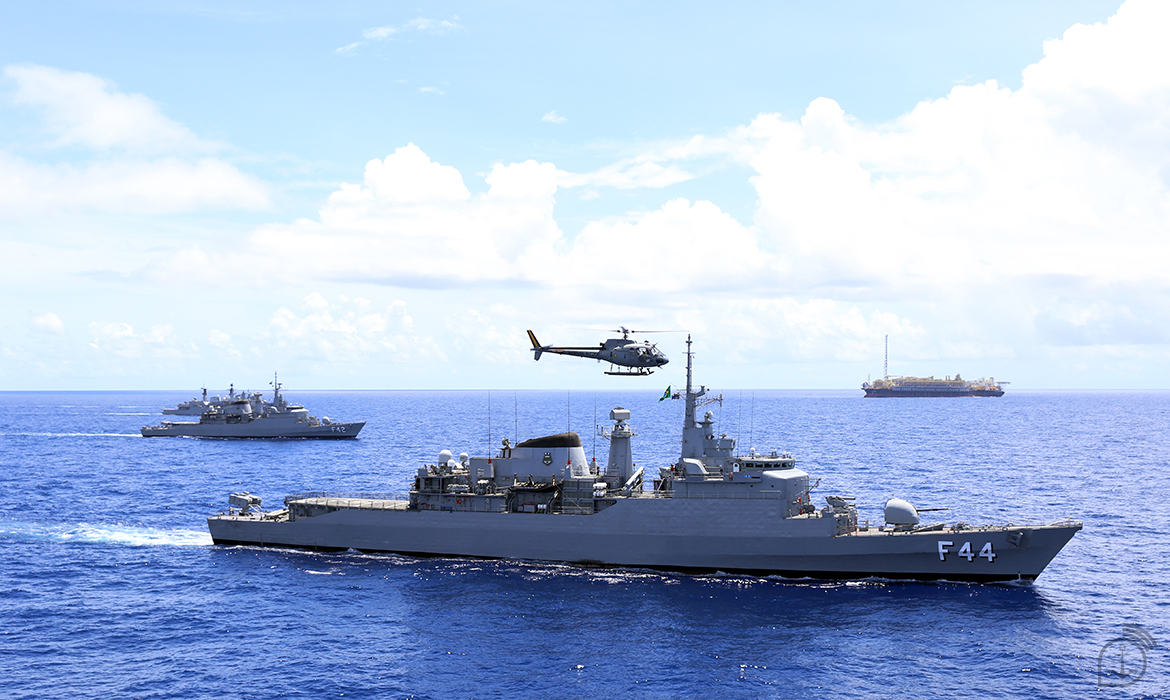 Fleet Ships in the Blue Amazon

Philippine Government Statement on the EDCA