July 24, 2020 (Google Translation) – In the framework of the health emergency due to the spread of COVID-19, in a joint operation carried out by the Argentine Navy and the Municipality of Campana, food, cleaning products, diapers, clothing and medicines are being delivered to 60 Inhabitants of the islands of the Campania Delta.

In addition, nurses from the local Ministry of Health carry out medical checks and deliver water treatment pills provided by the Islands General Directorate. 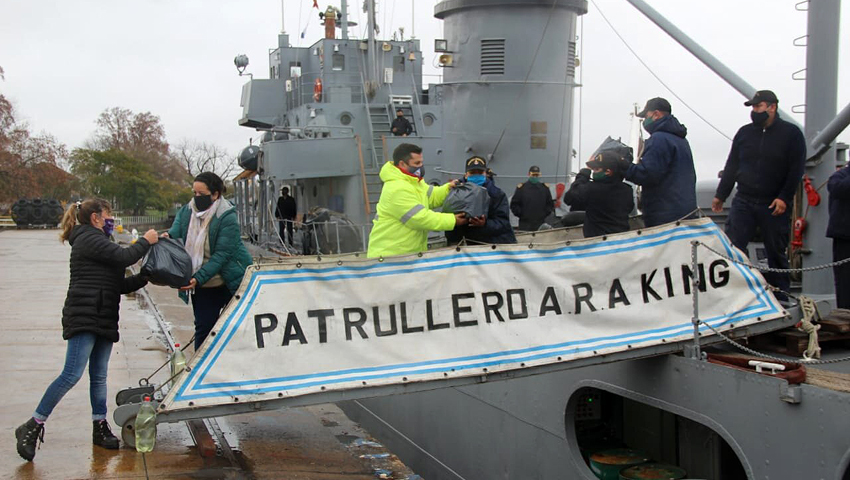 After the arrival of the ARA “King” patrol boat and the ARA “Río Santiago” patrol boat to the provincial dock of Campana, the shipment of the elements that are being distributed began yesterday. The same personnel from the Municipality and Civil Defense participated.

There, the “King” was visited by Mayor Sebastián Abella, along with the Secretary of Economic Development, Sergio Roses, who were received by the Commander of the Ríos Squadron, Frigate Captain Ariel Gómez Mombello. The municipal president declared that “this operation is extremely important because it is carried out comprehensively, with the participation of different municipal areas, and involves logistics that is only possible with the support provided by the Argentine Navy.”

Today, two other units from the Ríos Squadron also joined, the multipurpose ARA “Zárate” and ARA “Ciudad de Rosario”, from Rosario, where they were participating in the actions to put down the forest fires that affected the area .

The ships of the Ríos Squadron move the elements to the area of ​​the islands and, once there, means from the Company of Minor Boats of the Marine Infantry Battalion No. 3 enter the channels to bring food to families.

The operation also includes the participation of the Argentine Naval Prefecture, INTA, National Parks and the Red Cross, and the collaboration of the DEPSA company. “It is an unprecedented operation that we can achieve thanks to the opportunity that the Argentine Navy offers us to reach places that we usually cannot because of equipment deficiencies. It is an opportunity that we want to take advantage of very well ”, concluded the participants.